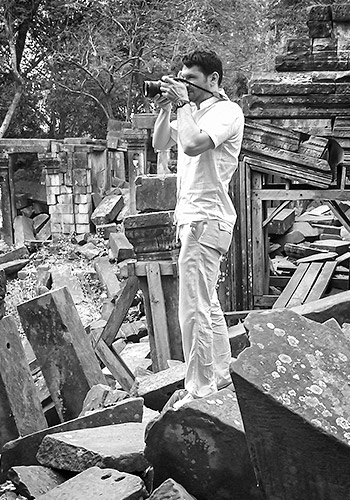 While many dream about one day making it there, Joseph Pisani left his hometown of New York in the mid 90's, and hasn't looked back since. Over the past few decades, Pisani has extensively traveled throughout most of the USA, and seventy-one countries. Armed with little more than a backpack, sketchbook, camera and a one-way plane ticket, he searches out exotic adventures while purposely avoiding the easy route.

«Sure, there's been some pretty rough moments along the way,» he explains, «but it's the trouble spots that often bear the most exciting memories.»

These experiences, such as stowing away on a ferryboat in Greece, exploring uninhabited islands in the Philippines, chasing serendipity through Nepal, riding a bicycle from Laos to China, or working on a charity project through India become the subjects of his paintings, sculptures and photographs — each one telling a unique tale.

Sure, there's been some pretty rough moments along the way, but it's the trouble spots that often bear the most exciting memories.

Pisani explains, «I attempt to lead my viewers in the right direction about where I was, and what I was thinking or feeling at the time of creating a particular painting through the poetic titles I give each piece. These somewhat obscure titles serve as clues and are often connected to a specific story or memory of something I experienced during my travels. Then, after giving this initial clue, it is my specific purpose to leave the viewers on their own to question how the title relates to the art itself and to decide how the artwork makes them feel in the context of my clues — the initial dialog between the work of art and audience.»

Pisani's art has been described as large scale abstract landscape paintings, that are often times quite colorful and with depth. While he may have his foundation grounded in post impressionism and abstract expressionism, he has clearly broken through these descriptions and created a style that truly his own.

A few of the places that have truly inspired...