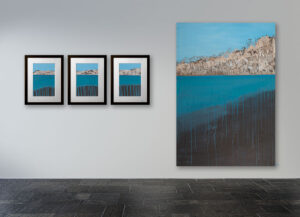 Gallery view of “Memories of Paradise Island”, a new abstract landscape painting series by Pisani based on a trip to El Nido, Palawan in the Philippines. ©Pisani

Memories of Paradise Island is an abstract landscape painting series inspired by a photograph I took while backpacking though the Philippines, quite a few years ago. I just loved the colors and mystical feel of the photo, as well as the wonderful memories it inspires. I took the photo while exploring the amazing deserted islands around El Nido, northern Palawan.

Palawan is an island that sits between the South China Sea and the Sulu Sea. Also known as the last frontier, since much of the island is quite remote and during the time of my visit about 9 years ago, all electricity, if there was any available, was provided by generators. This gave the place an exotic, back to the roots feel–a perfect fit for a tropical island paradise. After arriving in Puerto Princessa, the capital city, I caught an uncomfortable bus north, to El Nido.

El Nido, once you escaped the more inhabited spots, was a true paradise. It was also the gateway to the many enchanted, deserted islands scattered around the Bacuit Archipelago, where jagged limestone cliffs emerge from crystal turquoise waters.

I hired a boat captain who took me on his worn, wooden boat to visit some of the small islands. Riding so close to the water on a boat older than I was, definitely added to the adventure, and I clutched my waterproof camera bag tightly as splashes and mist hit me from all sides.

The boat captain arranged to to drop me off on one of deserted islands for the afternoon. I spent the day alone there, exploring the small ring of tan beach and black rock, avoiding giant monitor lizards, while sipping on fifteen-year-old rum from the bottle. It was a strange feeling, willingly committing myself as a castaway on an empty island. At times, the thoughts of remaining stranded there played on my mind, in between the onset of sunburn, and a slight buzz from the rum. Luckily, just to be sure about my trip back, I didn’t pay the captain until he picked me up later that afternoon…

Of the roughly 20 photos I had taken that day, one in particular seemed to perfectly sum up that feeling of sitting on that Island that day. When I gaze into this abstract picture, the smells of surf and salt, and the sounds of the trees rustling in the breeze float back, evoking a feeling of isolation and adventure, so far away from anything I knew… More paintings can be viewed in my contemporary art portfolio.

The Backstory: Here’s to the Times We Took Chances
Ellen von Unwerth: an Inconic Photographer in Front of my Lens
Go back to the ArtBlog Main Page...