Travel Photography Rules of the Road, Part One 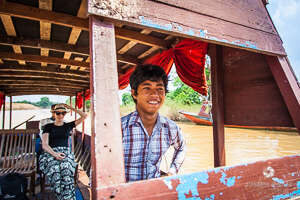 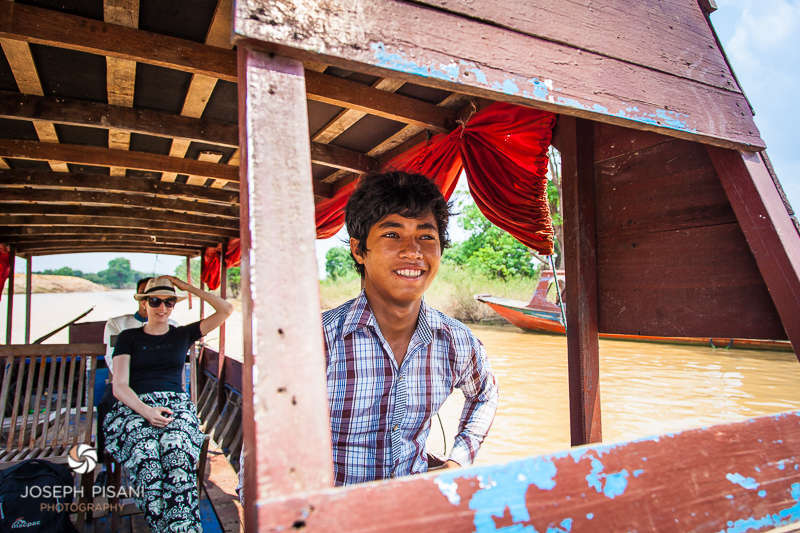 Trying new perspectives (in this case actually crawling out on to the rickety bow) can mean a great shot, or no shot at all.

After more than seventy countries of travel photography experience already under my camera bag, I decided to share some of my best photo tips to help you start making better photos next time you hit the road.

1. The Best Camera is the Camera you Have with You!

Not sure who originally said this, but it’s pure photo gold for its simplicity. Now personally, I’m not about to trade in my bulky SLR for a compact camera, despite how much easier it might sometimes make things. I accept this as part of my photography game and lug my heavy camera bag along with me where ever I–whether I feel like it or not. (See my article about “Adventure Traveling with Camera: Tips on What Photo Gear to Bring & How to Carry it” for some tips on making life on the road easier with a big photo kit.) However, if you find that you’re often leaving your camera back in your room because it is too big and heavy to carry, then you should seriously consider getting a compact camera. How many times have you seen an potentially amazing capture only to realize that you left your camera in your room? 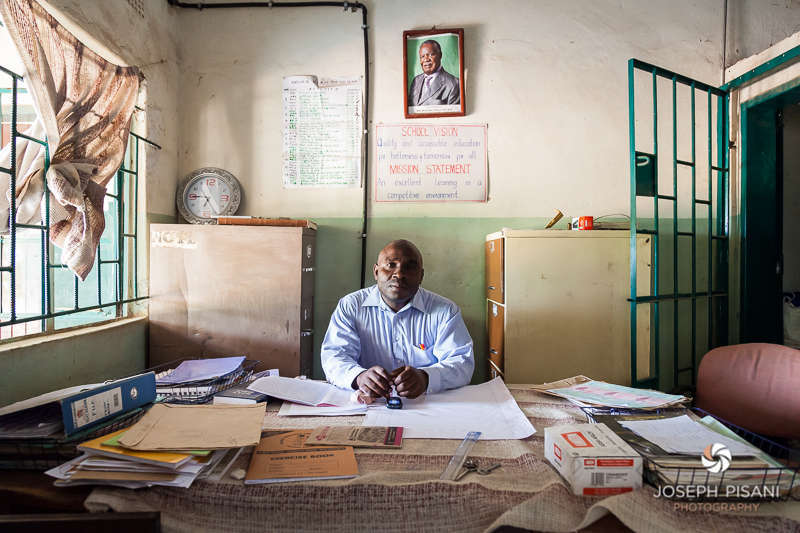 The Headmaster, a schoolhouse in Zambia

This used to be a bit of a problem for me. At times, I would be hesitant to start shooting photos depending on the surroundings. Getting past this feeling is imperative to getting better images. What I sometimes do to help get started is to crouch down somewhere, a bit out of the way, then just start shooting–especially so if I have a long lens with me. Often, by being a bit out of the way, most people don’t even seem to notice me. Then, after about ten minutes or so, I get into my photo groove and then find it easier to start being a bit more bold in what I am shooting, and what I might attempt. Now, I realize there is a big debate about whether or not we should ask people before photographing them, but, I personally shoot first, and ask questions later, whenever possible. I’m just a horrible person, I know! It’s just that there is no single better way to ruin a potentially good shot than to go up and ask someone if you can take their picture. That mannequin-like stiffness they inevitably transform into after they agree (assuming they do agree) isn’t going to win any photo prizes. So far, even in some very sketchy places where street photography was quite frowned upon, I never had anything terrible happen to me–at the worst, a police or security official would just tell me to stop. Once or twice, they wanted to see what I was photographing. For more about this kind of adventure photography, see my article about my trip to the Communist Country that doesn’t officially Exist…

Setting up the Photo Scene

With that said, if there is a specific person in a specific scene that I want to photograph, I will of course ask them. Then, it is my job as a photographer to get them to feel comfortable in front of my lens and to gentle persuade them into a natural pose as quickly as possible. That was the case with the above photo of headmaster at a small schoolhouse in Zambia. When I saw his vacant office while visiting this rural schoolhouse, I just knew I had to find him and get him to sit at his desk for me. Making your subjects feel comfortable in front of your lens is probably the most important job you have as a “people” photographer. Talking to them, making them feel at ease, telling them how great the photo is going to look and smiling can do wonders. Also, don’t forget to show them a few of the photos on the camera’s display to instantly win some new friends when you’re done.

In the barber shop photo below from Kathmandu, Nepal, I rather boldly poked in with a big smile and asked if I could take a few photos–they were more than happy to oblige. Assuming the sale (in this case, a positive reply) often really helps. Additionally, to try to overcome any unnatural stiffness in your subjects, take a couple shots and then wait and chat a bit until your subject loosens up again–then, when they think your are finished, they normally will ease up–then start snapping! 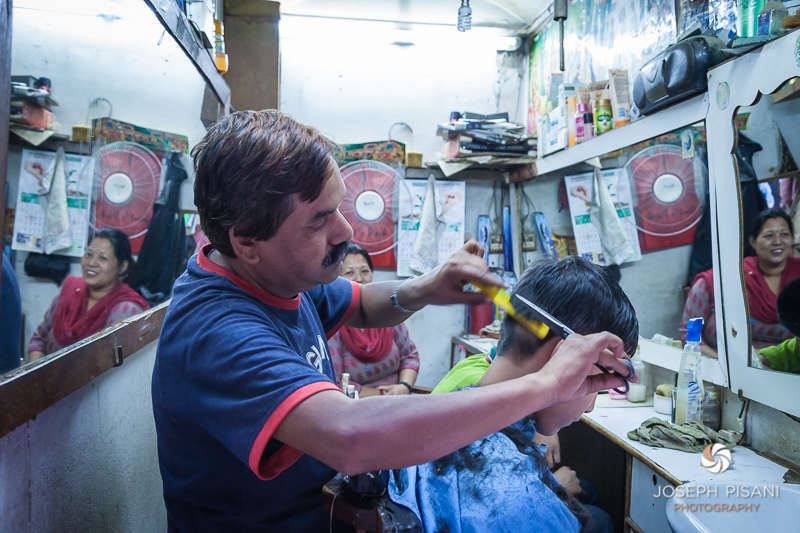 If I hadn’t been a bit bold and asked, I would never have gotten this great photo at this shoe box sized barber shop in Kathmandu, Nepal.

I am all for optimizing my time spent taking photos while traveling. There are just too many great things to do and experience in each new place I visit. So, the last thing I want to do is have my eye forever glued to the camera’s viewfinder. However, I still do want to make some great images each place I visit. If you want to maximize your photography time spent, make sure to utilize the short span of time about 30 minutes before and after both sunrise and sunset. This time is also know as the “magic light” or “golden hour”. Over the years, I have even started to only shoot travel photography at these times, and I am quite sure I am not missing out on much. All too often, I end up hanging out and waiting for the Magic Light to arrive, only to watch in bewildered amusement while most of the other tourists disappear right before the magic arrived. Beautiful light with vivid colors and nobody getting in the way–what more could a photographer ask for? Early mornings are also great for crowd control. 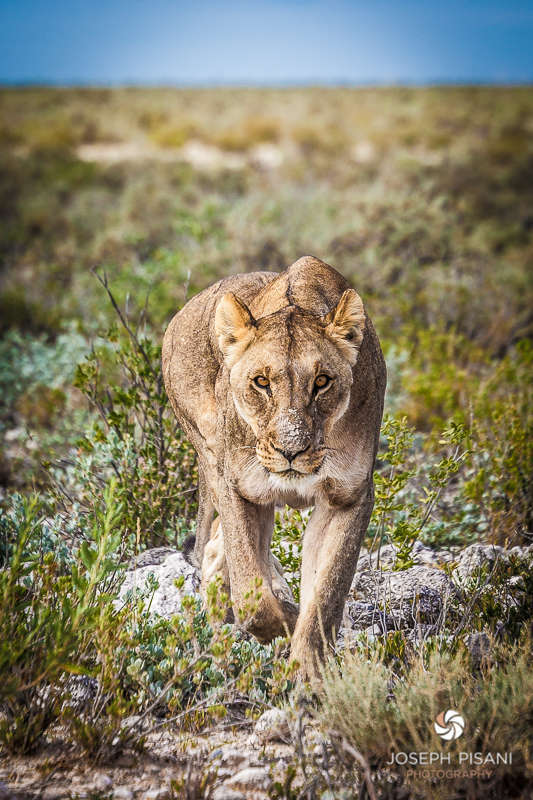 Caught this lioness hunting in the morning “Magic Light” at Etosha National Park in Namibia.

Make sure to keep a few basic photography rules about composition in mind when lining up your shots. For example, by using leading lines, frames, the rule of thirds, and positive and negative space, you can greatly improve on your travel photos. To apply this, make sure to follow this tip: When you see a potential shot, after looking through the lens, take the camera away from your face for a second and survey the scene around you again. This simple step should help to avoid what I call “viewfinder blindness”. By adding this little step, you just might end up noticing something that could help turn a potential good shot into a great one. Additionally, try the same shot from a few different perspectives. Often, after I make my initial shot, I will think about how I could photograph the same scene in a different way. Often, these later photos are much better than the original one.

5. Cliché is the Death of the Photographer: Be Different!

This is a continuation from the “Don’t go Blind!” rule above. For starters, this rule is especially true when you want to take a picture of a famous landmark or icon that has already been amazingly overshot for decades. Often, you will see somewhat the same exact photo again and again when it comes to something like the Pyramids of Giza, etc. Sure, take that shot, if you really must, but don’t miss out on the potential for the new and exciting. Again, take a step back, get down low, or up high, anything different, then attempt to capture that old landmark from a new perspective. Don’t be afraid to try something outlandish in order to get the shot, as long as you don’t jeopardize your safety in the process. Personally, I will climb (not always allowed, but if you don’t ask…), or lie on the ground, or whatever else I can think of to get the shot. I am long immune to the many strange looks I often get from others wondering what in the world I am doing as they go about making yet another magnificently cliché photograph. With that said, be careful not to get run over, or loose your footing in the process–looking around and being aware of your surroundings is essential while making great travel photos. For example, in the photo on the boat above, I had to crawl out on to the rickety bow, with nothing to hold on to, and no railing–however, it meant a great photo where there was otherwise none. I’ll take those odds–just make sure you know the odds through awareness before doing anything unintentionally stupid.

Travel Photography Rules of the Road, Part Two is coming soon. In the meantime, have a look at some of the other moments I captured along the way in my Travel Photography section or, view the Abstract Paintings these photos inspired. And, don’t forget to leave a comment about some of your own favorite travel photo tips.

Art Q&A from Caracas, Venezuela: A 6th grade Art Class has questions for Artist Pisani
“The Smoke that Thunders”: Jan – Mar 2017 at the Galerie Le Sud, Zurich
Go back to the ArtBlog Main Page...