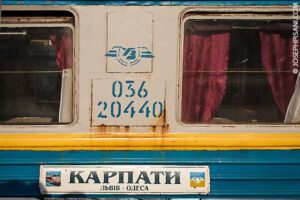 Iron Curtain Roulette: The rules of this trip were easy: The entire former Soviet Block was in bounds, and every travel decision had to be spontaneously made in the bus or train station, as if spinning a roulette wheel at each turn…

It’s 3 am in L’viv, Ukraine, and we were standing in a disco called Misto. The dance floor, decked in a beach theme, was covered in sand and the place was jumping. We ended up here by chance, as the rules of this trip were few. The entire former Soviet Union was within bounds, while each travel decision must be made spontaneously at the bus or train station, as if spinning a roulette wheel at each juncture. L’viv. This beautiful, UNESCO world heritage site was a stopover on the way to our goal—Transdniester, a communist sliver of a republic, sandwiched between Ukraine and Moldova. It remains unrecognized by any international organization. How could we resist a country that doesn’t officially exist? But getting there was an adventure all of its own. We arrived in L’viv on a night bus from Warsaw in Poland at 7 am and spent the day exploring. Old tractors mixed with small cars in the city center. An antique tram clacked and zigzagged around town. A closer look revealed many little “red” reminders of Ukraine’s Soviet past.

(This story was originally published in INSIDE magazine.)

The strange feeling that we were being surveilled kept us on edge during our tour of the town.

Like a Scene right out of an old Bond Flick

These reminders included the strange feeling that we were being watched. It kept us on edge. Our suspicions were confirmed when I tried to compose a scenic photo which included a man with his back to us. As I set up the shot, he removed a small mirror from his pocket and proceeded to use it to spy on my movements behind him. It was a scene lifted straight from an old Bond film (see photos). Our suspicions turned to fear while I was composing a scenic photo to include a man with his back to us. Upon setting up the shot, he removed a small mirror from his pocket and proceeded to use it to watch me behind his back like something straight out of an old Bond flick.

Unsettled, we headed back to the main promenade, where it was time for some food and a stiff drink. Everything was written in Cyrillic and almost no one spoke English, but we were up for the challenge. After finding a quaint restaurant, we worked at deciphering the menu. Surmising the basics did us little good without a real understanding of Ukrainian. A good reason, I proposed, to expand our travel theme to include “menu roulette”. The waitress arrived and we pointed to an unknown entree, pledging to eat whatever was served. We did surprisingly well on our first “spin”. I scored fried fish covered in mayonnaise and garnished with cucumbers. Jay loved his stuffed cabbage rolls (Holubtsi). In contrast, ordering appetizers and drinks was easy, “Caviar and vodka, procim”. We were reluctant to leave L’viv, but Transdniester beckoned and, after hopping on a tram to the baroque train station, we “spun” Odessa on the Black Sea for a little sun. However, buying the tickets proved nearly impossible. We were sent back and forth between the same two ticket windows twice, before the woman behind the glass simply told us “Niet”. For our fifth visit, we improvised, writing “Оде́са” (Odessa) in our newly learned Cyrillic, and bought tickets in a sleeper cabin. After a rough night in an old but charming train, we arrived in the proud city of Odessa. The station’s silver spires welcomed us as we headed through the throngs and into town. Descending the 192 Potemkin Steps, we felt a sense of solemn solidarity with the innocent bystanders who’d lost their lives in the uprising a century ago. We declined the opportunity to be photographed with a monkey and a small crocodile. A young couple, however, failed to see the risk in posing their young child with a live reptile. For their bravery, the photographer placed a live iguana on the man’s head before snapping the shot as we stood in pure bewilderment. Here in Ukraine, it seemed as though footprints from the Cold War still left a dent in the public psyche. On our way to lunch, while I composed a photograph, a man approached, agitated: “You intelligence. You CIA!”, he said while pointing an ominous finger in our direction.

Moldova was our newly chosen base for entry into Transdniester. The train service was “discontinued until further notice”, and the next bus to Chisinau, the capital of the country, left the next morning. With only one night left in Odessa, we visited the much-hyped outdoor discos on the beach, drinking gin and tonics and swaying to the grooves as the full moon glistened over the Black Sea in the distance. Staring into the night, I envisioned future paintings and conjured poetic titles of the scene. We arrived in Odessa around 8 am after a rough night of bouncing and swaying an old, but charming train.

Late Night Run-in with the Police

It was after 4 am when, en route to the taxi stand, we were approached by two police officers. They had obviously overheard us. “Step this way please.” They were two of the few people we’d met who could speak English. They demanded our passports. We knew that we weren’t required to carry them. Jay had left his in the hotel, and mine was stashed in my hidden money belt. I thought it might make things more interesting to claim we had both left them at the hotel. “No passport, small problem,” one said. They started to interrogate us. “What were you doing?, Where are you from?” Each question was punctuated with repeated requests to show our papers, or return with them to the police station. I got the feeling that they were looking for a bribe, and decided to test my theory. “Maybe it would be better if we went back with you to the police station,” I suggested. “That would not be good for you,” one replied. “Maybe you could drive us to our hotel and we could show you our passports,” Jay added, joining in. When one officer demanded my name, I extended my right hand. “I’m Joseph, nice to meet you. What’s your name?” Jay followed my lead. They reluctantly outstretched their hands and introduced themselves. Max and Arthur looked at each other rather perplexed. Arthur then removed a tourist map from his pocket and handed it to me. “Present for you. Good night,” he said. We thanked them graciously and headed home, delighted that we’d received a gift rather than having to give one. Odessa Bus Station — Vodka for Birthday Breakfast on the way to Moldova.

At Odessa bus station the next morning, while snapping away outside the buffet, I was invited inside to join a birthday celebration. Five women, all workers at the terminal, sat around a table laden with food and birthday cake. They were drinking shots of vodka. It was 10 am. Despite the language barrier, I knew I was also expected to drink and I grabbed Jay so he too could join the party. They were the nicest people we’d met in all of Odessa, but we had a bus to catch. Chisinau, the capital of Moldova, was instantly difficult. The first three cash machines we’d found simply rejected our cards. So, without taxi money, we walked miles into town with our heavy packs and no idea of where we were headed. The city was lined with burned-out olive and gray Soviet-style apartment blocks that were actually still inhabited, giving the place an eerie feel. We checked into a hotel and started planning our entry into Transdniester. I had read that—if one is to believe anecdotal evidence, a visit there is almost guaranteed to feature one or more of the following: bribes, suspicion or outright ostracism by locals, possible run-ins with the Ministry of State Security (a modern KGB), and possible detainment. We couldn’t wait to cross the border…